I’ve just spent about a day poking around in the guts of Erlang/OTP and Ranch, and I thought I’d write some of it down.

I needed to refresh my memory of how to use Ranch, so the first thing I did was start a ranch TLS listener and attempt to connect to it.

Something like this (except that I actually did it in Elixir, of which more later):

…but it was simply failing with {error, closed}, and nothing was logged at the server.

tl;dr: Make sure that certfile and keyfile refer to valid, PEM-formatted certificate and key files.

If that spoiler is sufficient, great.

If not, follow me into the depths of ranch and Erlang. Oh, and some Wireshark.

I should also point out that I knew this was the problem; what was annoying me was why it was failing silently. We’re going to be deploying a service using this stuff. If it fails because of a configuration problem, I’d rather it failed noisily.

In order to check that the connection attempt was actually making it to the server, I captured a network trace with Wireshark and took a look at it.

Because it’s a pain to embed Wireshark in a blog post, here’s some (abbreviated) tshark instead:

You can see the standard SYN / SYN,ACK / ACK for connection establishment, then a “Client Hello” (and corresponding ACK). Then, more or less immediately, an RST as the server drops the connection.

But nothing appears in the server log, so what’s going on?

I started digging into the ranch source code, to see if I could figure out what was happening. Ranch is structured like this:

Ranch has a pool of ranch_acceptor processes, which are all listening on the socket and accepting connections. It defaults to 10 acceptors, but the diagram only shows 3.

When there’s an incoming connection, the operating system (and Erlang) will wake up one of them (arbitrarily) to accept the socket. The acceptor will ask its associated ranch_conns_sup to start the protocol handler.

The relevant part of the Ranch source code looks like this:

I’m not going to include all of the source code here, but if an error occurs in Transport:accept/2 (which in our case is ranch_ssl:accept), the error is quietly ignored and the acceptor loops.

So I looked at ranch_conns_sup:start_protocol. It looks like this:

That is: it sends a start_protocol message to the relevant ranch_conns_sup (see the earlier supervision diagram) and waits for a response. If that fails, the whole thing errors out. That’s uncaught, which means that the ranch_acceptor would be killed, and I wasn’t seeing that.

If you look at the handling for the start_protocol message, it looks like this:

At this point, I should note that I hadn’t actually implemented example_protocol, so Ranch would have been completely correct to error out.

That is: it would have tried to invoke my non-existent protocol, which would have thrown an error, but that would have been caught, and Ranch would have logged a warning. I confirmed that that works properly by temporarily switching to using ranch_tcp rather than ranch_ssl. It logged the warning.

So I now had a solid suspicion that Transport:controlling_process was failing. I checked that by using a custom Ranch transport, with extra logging. Since I’m actually writing Elixir, it looked a lot like this:

That confirmed that controlling_process was returning {:error, :closed}.

And the source code for ssl:controlling_process looks like this:

So the first question is: am I sure that this is the correct function clause? It’s a good question, and one I can answer by modifying the custom transport:

Aside: I wonder if Elixir’s IO.inspect() can be made to understand Erlang records.

The record definition for sslsocket is in ssl_api.hrl and, well…

Searching in the Erlang/OTP source code, I found the following in dtls_socket.erl:

It looks like the pid field is now a list of pids, and the fd field is, well, some stuff.

Whatever. Our socket has a list of pids in it, so the first clause of the ssl:controlling_process/2 function is the one we want. It calls ssl_connection:new_user(Pid, NewOwner) using the first pid in the list, which looks like this:

…which is extremely promising.

Down the rabbit hole

I need to confess that at this point, I wasted an hour or so looking at how new_user was handled in ssl_connection, before figuring out that I was looking in the wrong place. That first pid in the list isn’t an ssl_connection.

Allow me to continue down this particular rabbit hole for a while first, though – it’s not without interest.

The first thing to look at is that call, above, converts process death (or an already dead process) to {error, closed}, which is precisely what I’m looking for. So is the process dead?

Answer: no. The process is still alive and kicking. So the {error, closed} has to be coming from the state machine.

It can’t be coming from gen_statem:call itself because why would gen_statem know anything about closed sockets? So I ignored that possibility.

Also remember I was still looking at the wrong code at this point. If I’d been paying closer attention at this point, I’d have figured that out sooner. I’ll pick that thread up later.

I spent some time digging in the ssl_connection source code, looking at how it handled new_user, and couldn’t figure out exactly what was happening. I got to this piece of code:

…but that doesn’t return the error, and doesn’t seem to have any obvious way to fail.

Maybe the state machine’s not in the state I think it is? We can query a gen_statem for its state by calling sys:get_state(Pid), so I did that:

It throws an error with a whole pile of stuff in it. What? How? More digging.

Ah. gen_statem returns {StateName, StateData}, but our state machine is apparently in the error state, so it returns {error, Data}, which sys:get_state interprets, well, as an error, and converts it to an exception. Whoops.

dbg to the rescue?

At this point, I broke out Erlang’s dbg module:

But I had already looked at the code that handles new_user:

…and that doesn’t call ssl_connection:ssl_config. So who the hell does?

It’s called from a few places inside ssl_connection, none of which looked particularly relevant, and from tls_connection:init/1, which might be relevant (narrator: extremely relevant, as it turns out).

ssl_connection:ssl_config calls ssl_config:init, so I added some more call tracing:

Looking in the trace, I didn’t see a return from ssl_config:init, but I did see this instead:

So the last thing to happen was that something called ssl_config:file_error. Now, I already knew that "server.crt" wasn’t a valid certificate file, but what’s going on in file_error?

It throws the error, which means that some code somewhere is either catching it, or dying. I know that nothing’s dying, because I checked for that earlier, so something’s catching it and… then what?

Looking for ssl_config in the ssl_connection.erl file (remember: I’m still on a wild goose chase at this point) leads to this section of code:

…which looks plausible – we’re probably in the init state (at this point I forgot that I already knew that we were in the error state). But {stop_and_reply, {shutdown, normal}, ...} causes the process to die, and we know that’s not happening (because erlang:process_info succeeds).

Sniffing around the right tree

I mentioned earlier that tls_connection:init also calls ssl_connection:ssl_config. It looks like this:

Interesting. If ssl_connection:ssl_config throws an error (and we know that it does), we call gen_statem:enter_loop with error as our initial state.

Who calls that? That’s a hard question.

Searching for tls_connection in ssl.erl reveals that it’s commonly found in the connection_cb field in #config{}.

I then noticed the tls_connection_sup module, which sounds like it might be supervising tls_connection processes. Some more digging, and I’d got this: 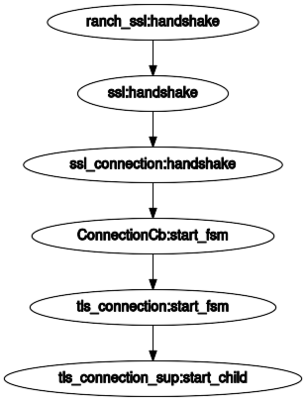 That Pid could be a tls_connection. How do we check that?

Taking a closer look at that, we find the following:

Which confirms that we’re looking at a tls_connection, and shows its supervisor tree. If I’d been paying more attention earlier, I’d have spotted that and would have saved a bunch of time.

Barking up the right tree

So, what happens if someone calls tls_connection with new_user while it’s in the error state? It calls this:

The use of ?FUNCTION_NAME and StateName doesn’t make this easy to follow, incidentally.

So we’ve figured out the problem: make sure that you specify certfile and keyfile options that point to valid files.

To detect a misconfiguration when our service starts, we can do something like this:

…which is (more-or-less) what’s going to end up in our production server at some point.