At home, I’ve got a rather nice setup with two Dell U2520D monitors on my desk, which I’m currently using from my (work) Linux desktop. However, more recently, I’m trying to strike a better work/life balance, so I’ve decided to start making more use of my (personal) Microsoft Surface Book 3 laptop, but I’d like to continue using the two monitors (which are also mine; I never bothered filing the expense claim).

This turns out to work fine. The Dell monitors support DisplayPort pass-through, using DP MST, which means that I can hook everything up like this:

…it didn’t work. The Mac treats the two external displays as a single, mirrored, display.

In a conversation on the work Slack, someone pointed out that the Mac would work fine if I connected both monitors via USB-C, like this:

…which works fine, but unfortunately doesn’t leave me with any more USB ports on the Mac. I don’t want to plug my various peripherals (keyboard, ergonomic mouse, webcam, headset, digital amp, etc.) into the monitor, because that means that the default audio output changes every time the monitor comes out of standby mode, which is really annoying.

What about a dock?

So I went back to Slack to ask about laptop dock recommendations. The CalDigit TS3 Plus seems to be the most popular answer, but it only has one DisplayPort interface, so in order to support two external monitors, you have to connect one via DP, and one via the dock’s USB-C port. To get the USB-connected one to work, you need to install some Displaylink software.

That seemed untidy to me, and CalDigit offer a dock with two DisplayPort interfaces: the CalDigit USB-C Pro Dock, so I ordered one of those instead.

The plan is that it should work like this:

It doesn’t work with the Surface Book 3:

The laptop detects the second monitor just fine. It just refuses to use it.

The Surface Book 3 doesn’t have Thunderbolt, which means that (according to the CalDigit website) the dock only supports HD monitors, rather than 2K or 4K monitors.

I’m not entirely sure why it doesn’t work – using USB-C without the dock works fine, as explained above, so there’s plenty of bandwidth.

This is annoying. The point of the dock is that I should only have to move one cable to switch between laptops.

After some thought, I came up with a solution. It’s not perfect, and it means that I’ve paid money for a dock that I’m only half using.

When I’m using the Macbook: 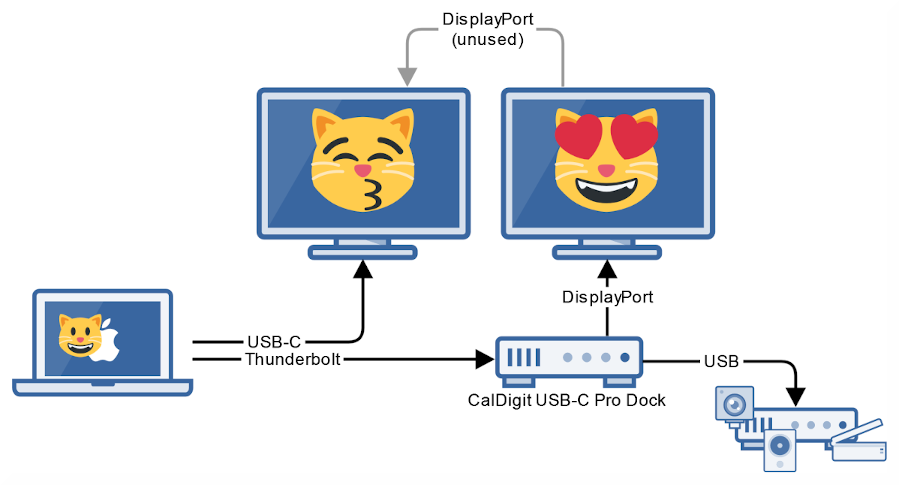 …and when I’m using the Surface Book:

It does mean that when I want to switch from Mac to Windows, I need to:

…and when I want to switch back to the Mac, I need to:

It’s possible that “Auto Input Select” will take care of some of this.

It does mean, however, that – ignoring the peripherals – I can leave both laptops connected to both monitors.

And what about the Linux box?

I can leave that connected to the HDMI inputs on the two monitors. Then the whole thing ends up looking like this: 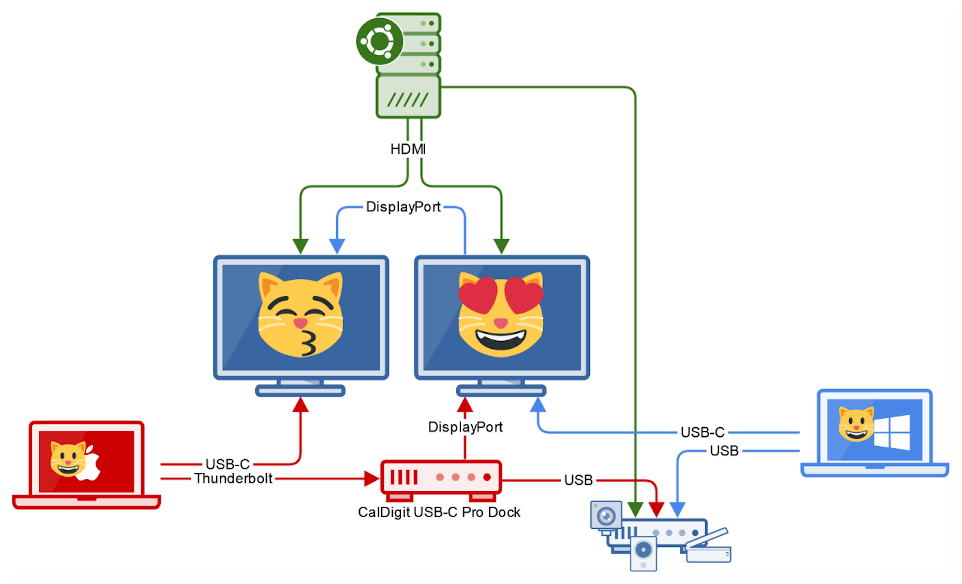 …ignore the fact that all three computers seem to be connected to the USB hub at the same time.

To switch to the Linux box, I need to: