According to this page, the Debian xserver-xfree86 package includes support for the Intel i815 chipset in the SRX87, so grab that using dselect or similar.

Walk through the configuration options. You want to select the i810 option, and answer “Yes” when it asks if you’ve got an LCD display. Tell it to only support 1024x768. Otherwise, the defaults should do. The mouse is PS/2 compatible and should be available on /dev/psaux.

Since startx isn’t installed, you’ll also want to install some kind of xdm-like program. I chose xdm, in fact. It requires/suggests a bunch of other stuff. Accept the defaults.

I tried starting X by simply running xdm, but the screen flickered a lot and nothing happened. Pressing Ctrl+C a couple of times eventually returned me to the prompt. Looking at /var/log/xdm.log revealed that I had no fonts installed.

So you’ll also need a font server and some fonts. I installed xfs-xtt and xfonts-base.

You should get a login prompt. It won’t be pretty, though: 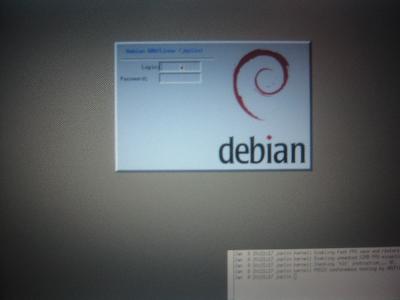 Check that the touchpad moves the mouse pointer and that you can log in.

Unfortunately, I couldn’t log in at this point – it just returned to the log in screen. Further investigation revealed the following message in /home/roger/.xsession-errors:

Enough of that, I installed gdm using dselect, because I figured that it’d drag in a session manager. It drags in a whole heap of other stuff as well, though. Time to make a cup of tea.

I had to grab a GNOME-compatible window manager and gnome-terminal, and install gnome-control-center, but after that, it was more or less usable.