I pushed a simple node.js server to my private docker registry, as follows:

It successfully pushed a number of layers, and then got stuck retrying the others:

What’s in the logs?

The logging is really hard to read, but somewhere in it, I can see the following:

The filesystem’s read-only? It was writeable a moment ago. Huh?

What I suspect has happened here is that my iSCSI setup has got itself in a muddle. We should check a few things.

First: is the file system, as seen by the container, read-only?

Well, we’ve obviously managed to upload some of the image. Is the filesystem still read-only?

Yes. OK. So it’s not lying. How did it get into this state? Running dmesg -T on the relevant node is, well, both pretty (all those colours!) and not pretty (all that stack trace): 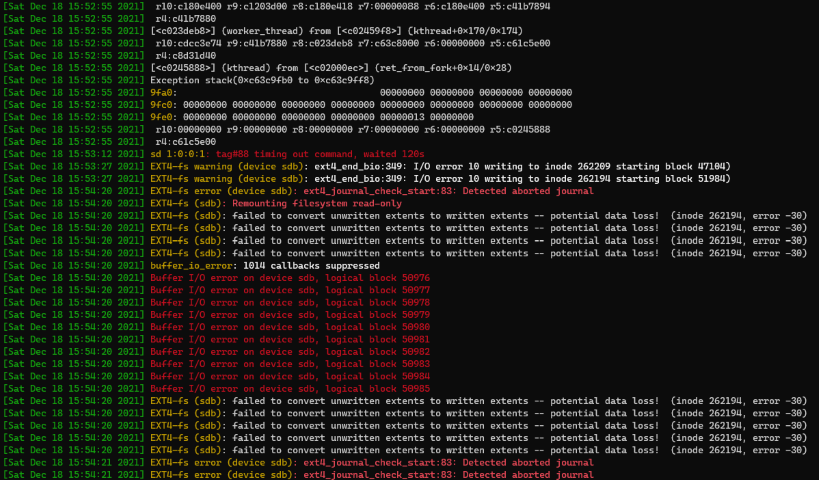 This is not funny. Filesystems only do this when they’re extremely distressed.

I restarted the pod on another node, which remounted the filesystem read-write and tried again.

Don’t try this at home. You should recover the volume and run fsck first. But, hey, test rig. #yolo.

When retrying, that also failed after a while:

To be honest, I think that my DS211 might be a bit underpowered to act as an iSCSI target (at least without some tweaks to the client configuration, anyway). Or maybe it’s just a bad disk – I found it in my parts bin, and it’s several years old. It also reports power-on time of ~30K hours. I should have done some more soak-testing first.

I’ll give up on that for the time-being.

Let’s go back to dynamically-provisioned storage, even if it does make the pod have node affinity. We can take another look at alternatives later.